YOU Wiki
Register
Don't have an account?
Sign In
Advertisement
in: Characters, Female Characters, Main Characters,
and 2 more
English

Throat slashed with a knife by Love Quinn

Fear and Loathing in Beverly Hills (Alive)
Love, Actually (Corpse and Flashback)
Delilah Alves was a main character in the second season of You, and is portrayed by Carmela Zumbado.

Delilah is an investigative reporter and manages the apartment Joe moves into in LA. She takes care of her younger sister Ellie who lives with her. She moved to the city when she was underage and became a stripper to try to get by, when she met famous comedian Henderson. He developed a friendship with her, and while alone with him at his house she blacked out, waking up with her skirt pulled up and believing he had sexually assaulted her. She tries unsuccessfully to keep Ellie away from Henderson, hoping to prevent the same thing happening to her. After Henderson dies, she is determined to expose him and publishes an article about her experience.

She is initially suspicious of Joe and tells him to stay away from her and her sister. Later however, they develop a friendship and end up sleeping together. The two of them are caught having sex in an alley and arrested. She has a sexual relationship with a police officer who is not pleased by the situation, and has a growing suspicion about Joe and his connections with Henderson. He discloses this information to Delilah and she starts to do investigating of her own, which leads her to the glass cage in his storage locker. She intends to turn him in, but he catches her there and locks her in the cage. She promises she won't tell, and Joe says that he will release her, as soon as he can make arrangements to leave.

Before he can return to set her free, she is discovered by Love Quinn who, in a shocking turn of events, murders her so that she is not a threat of exposing Joe. 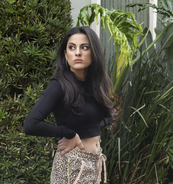